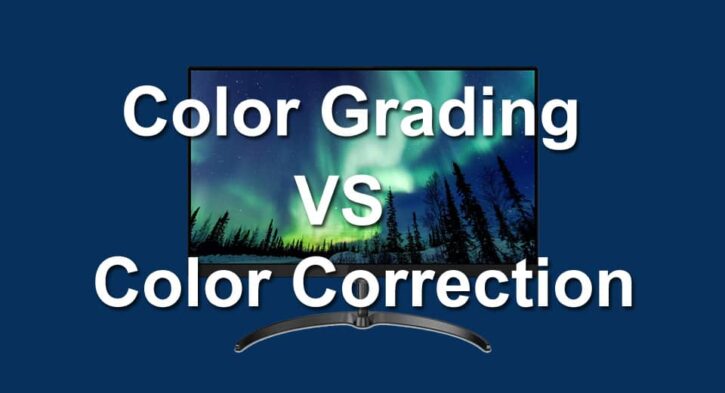 Color grading and color correction are the terms used a lot and we have all heard of them while discussing anything related to video editing whether on professional levels or on the basics. And these two terms are often used together quite a lot which mostly creates confusion that these two mean the same thing. However, the truth is the exact opposite. Color grading and color correction are two different types of editing used while editing any video or photo as a post production process.

Color grading vs color correction: What is the real difference between them? Color correction is almost always done prior to color grading and there is a reason behind that which we will explain later. Let’s now dive deep into what each of these processes are.

What is color correction?

Color correction is essentially what its name implies. It is a process of correcting the color of an image or a video which is blown out usually due to the camera or equipment used or some other reasons. The main purpose of color correction is to make the image look as real as the human eye when it sees the original image. It is made sure that the image is true to color during this process in which the image or each clip of the video is tweaked to match a consistent standard of looks and appearance.

Sometimes the image is so blown away that the editor has to color grade it to make the whites in the image appear more white, blacks to appear truly black and to make sure every color is balanced and not over or under shown.

When is color correction used?

Color correction can be used basically on any footage during post-production. Usually, if you are filming throughout the day or are constantly moving inside and outside, chances are that the lighting is not going to remain the same during the whole filming no after how much you try to keep it neutral by using lighting equipment. For example, if you are making a vlog and constantly moving around, your footage will need some color correction before starting the process of editing.

The next step in the editing process after color correction is color grading. It is one of the most important steps which determines how good a colorist is.

What is color grading?

While watching a movie or a high quality production level video, you might have noticed that the whole video follows a specific color scheme or looks to it. That is done with the help of color grading. Basically, color grading helps in setting a visual tone or mode to the video or footage which highlights the theme around it. This is used to enhance the aesthetics of the storyline and helps in an immersive experience for the viewer watching the footage. A normal looking realistic footage can set a tone of happiness or sadness just with the help of the colors used to represent it with the help of color grading.

Examples of how color grading works:

You have seen a horror movie and you may not remember the complete storyline behind it, but it is guaranteed that you remember the scenes and looks used in the movie. Usually, it is a dark tone with black-greyish atmosphere set around in a horror movie which gives the effects of horror and sinister environment. The dark/grey tone and mood set in the film is achieved via color grading. The footage or filming site does not look like what the viewers see on their screens. With the help of special editing softwares or specific softwares just for color grading, the standard mood and aesthetics of the movie or image is achieved.

Out of color grading vs color correction, color grading requires much more advanced softwares, skills of a colorist and hardware to run the softwares such as monitors, to achieve desirable results. If you are looking for the best monitor for color grading, you can check out our detailed article.

Hopefully, this article has helped in clearing the confusion between color grading vs color correction; the terms mostly used together. If you are interested in similar interesting pieces of information, check out our other related articles.